“Total global military expenditure increased by 0.7 per cent in real terms in 2021, to reach USD 2113 billion. The five largest spenders in 2021 were the United States, China, India, the United Kingdom and Russia, together accounting for 62 per cent of expenditure,” the Stockholm based said in a statement.

“Even amid the economic fallout of the Covid-19 pandemic, world military spending hit record levels,” said Dr Diego Lopes da Silva, Senior Researcher with SIPRI’s Military Expenditure and Arms Production Programme. “There was a slowdown in the rate of real-terms growth due to inflation. In nominal terms, however, military spending grew by 6.1 per cent.” 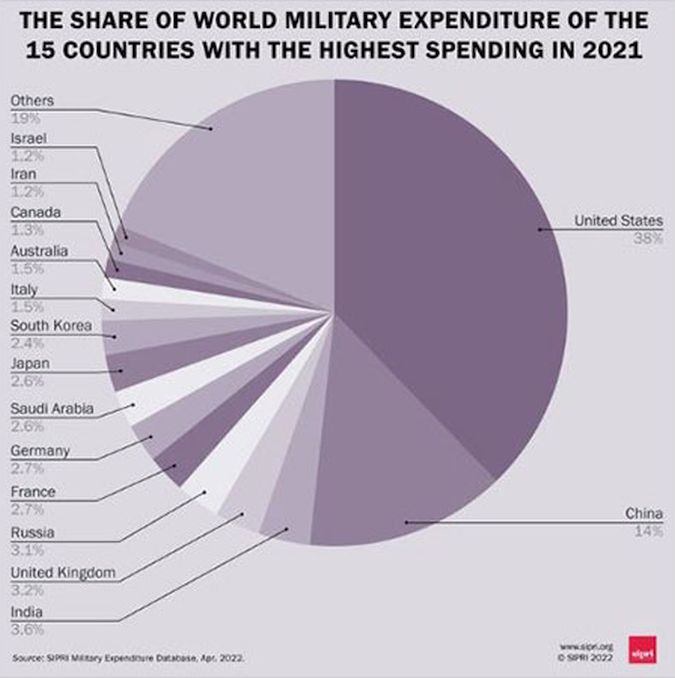 As a result of the economic recovery from the COVID-19 pandemic, defence spending amounted to 2.2 per cent of global GDP, while in 2020 this figure reached 2.3 per cent.

US military spending reached USD 801 billion in 2021, a drop of 1.4 per cent from 2020, the statement said. In the period from 2012 to 2021, the US increased funding for military research and development by 24 per cent and reduced spending on arms purchases by 6.4 per cent, according to the statement.

Second place went to China, which spent USD 293 billion on defence, an increase of 4.7 per cent compared with 2020. India’s military spending ranked third with USD 76.6 billion last year, an increase of 0.9 per cent in comparison with 2020.

According to the Stockholm based institute, India’s military spending of USD 76.6 billion ranked third highest in the world. This was up by 0.9 per cent from 2020 and by 33 per cent from 2012. In a push to strengthen the indigenous arms industry, 64 per cent of capital outlays in the military budget of 2021 were earmarked for acquisitions of domestically produced arms.

“Russia increased its military expenditure by 2.9 per cent in 2021, to USD 65.9 billion, at a time when it was building up its forces along the Ukrainian border. This was the third consecutive year of growth and Russia’s military spending reached 4.1 per cent of GDP in 2021,” the statement said.

In 2021, high energy prices helped Russia to increase its military spending, Lucie Beraud-Sudreau, Director of SIPRI’s Military Expenditure and Arms Production Programme, said, adding that between 2016-2019 Russia experienced a decrease in the military spending due to low prices of oil and gas as well as sanctions imposed on Russia.

Lockheed Martin To Reaffirm Commitment To ‘For India, From India, For The World’ A...

DRDO Working On 55 Mission Mode Projects For A Total Sanctioned Cost of Around...