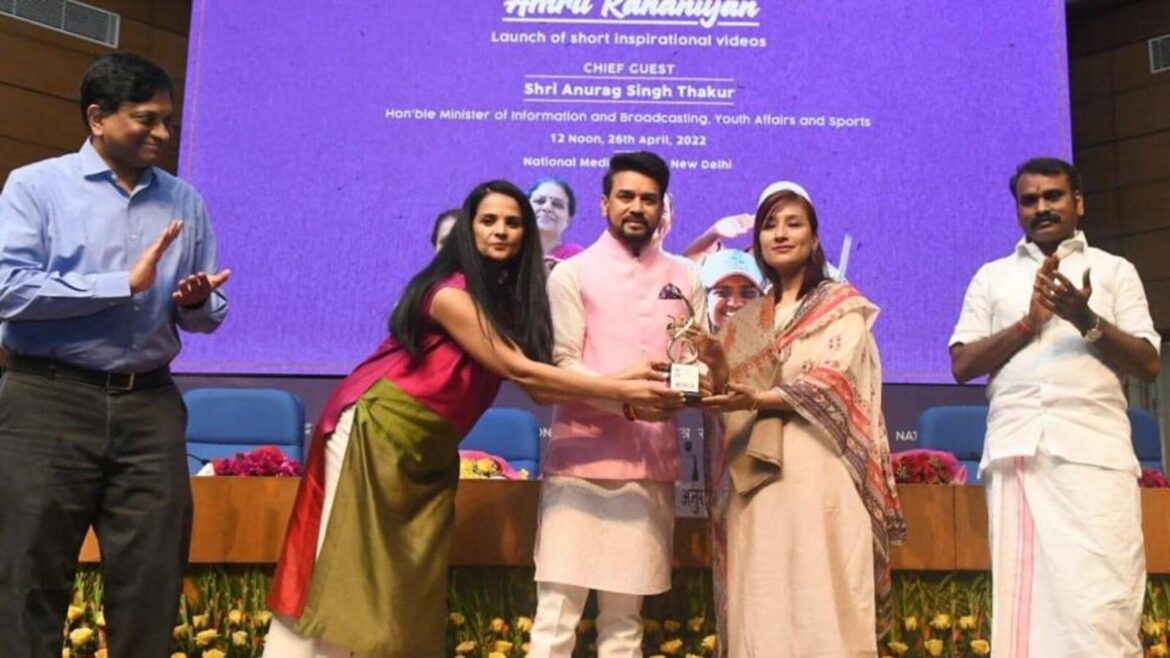 NEW DELHI: The ministry of information and broadcasting on Tuesday honoured seven women for their extraordinary achievements in fields ranging from flying aircrafts to ensuring complete vaccination. Their stories have been documented in collaboration with Netflix and will now be screened as short films, the government said in a press conference.

The ‘super seven’ include Basanti Devi, who fought for the preservation of Koshi river in Uttarakhand and is a Padma awardee, Anshu Jansempa, who scaled Mount Everest, Harshini Khandekar, Poonam Nautiyal, Dr Tesse Thomas, Arohi Pandit and Tanvi Jagdish.

“Women change makers Ms. Basanti Devi, Padma-award winning environmentalist from Pithoragarh known for her contribution towards revitalizing the Kosi river; Ms. Anshu Jamsenpa, a Padma Shri awardee for being the first woman in the world to summit Mount Everest twice in five days in 2017 and Ms. Harshini Kanhekar, the first female firefighter in India, were also present at the launch,” the government said in a statement.

Poonam Nautiyal, a healthcare worker, walked miles across Bageshwar district in Uttarakhand to vaccinate everyone. Dr. Tessy Thomas is the first woman scientist to head a missile project in India. Tanvi Jagadish is India’s first competitive woman stand-up paddleboarder and Aarohi Pandit is the world’s youngest and first woman pilot to cross the Atlantic Ocean and the Pacific Ocean solo in a light-sport aircraft.

The ministry added that the stories, which have been developed in collaboration with Netflix, will be available on various social media channels of the ministry and Netflix, as well as broadcast across the Doordarshan network. They will also be made available in other languages like Gujarati, Marathi, Bengali, Tamil, English and Malayalam to ensure that the stories are seen and heard by people across the nation.

The event is part of a series to commemorate the 75 years of India’s independence. Secretary of I&B Apurva Chandra felicitated the women.

“The plank of jan bhaagidaari has been at the core of the movement to mark the 75 years of independence,” said I&B minister Anurag Thakur. “This is one of the initiatives to celebrate the involvement of women and their achievements. Netflix and ministry will partner to develop a creative ecosystem by organising training programs for post-production, VFX, animation, music production among others and will be organised on the ground and virtually.”

He added that the women should be an inspiration to all, as they have led from the front. “What no woman has done, Harshini did, we all salute her,” he said. “This is just the beginning.”

The minister also commended the growth achieved by over-the-top platforms such as Netflix and Prime video. “Today, content is king, people will switch to OTT platforms,” he said. “That is the power that content has. I’m sure in the years to come, India will be the largest and the best content creator in the world.”

The event was attended by several of women honoured, Bela Bajaria, head of Global TV and Netflix and senior I&B ministry officials.