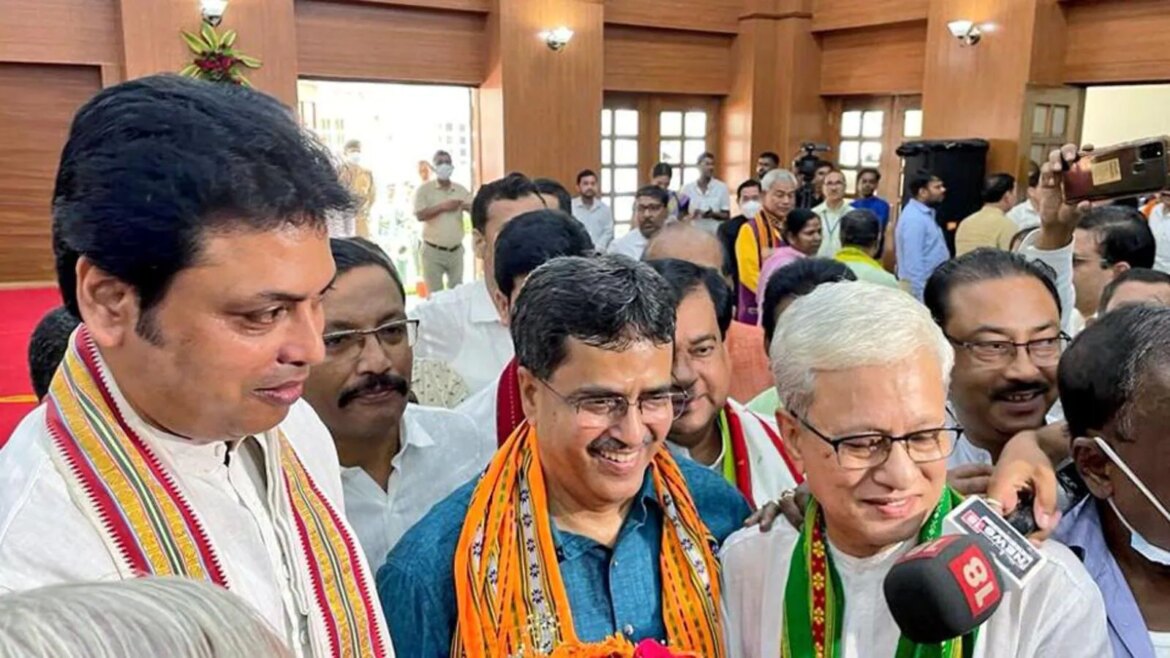 The Bharatiya Janata Party (BJP)’s attempt at a course correction in Tripura by replacing Biplab Kumar Deb with Manik Saha as chief minister less than a year before assembly polls in 2023 may have created rifts within the party, people aware of the development said on Sunday.

On Saturday, within hours of Deb’s resignation and the election of Saha as legislative party leader, cooperative minister Ramprasad Paul was seen shouting and hurling a chair at the party’s senior leaders in the party office, saying that he would not continue to work.

Paul took a U-turn on Sunday, saying it was an emotional outburst. “The BJP is a democratic party. Everything happens in a disciplined manner. I am here to work for the party, “ he said.

On Sunday, both Paul and deputy chief minister Jishnu Devvarma came to Raj Bhawan after Saha’s swearing-in ceremony was over, saying their delay didn’t have any special significance.

Jishnu Dev Varma and Paul were seen as potential candidates for the chief minister’s post, according to a section of party leaders. Some BJP MLAs were also unhappy that Saha, a Rajya Sabha MP, was chosen for the top post instead of someone from among the legislators.

An activist of the Rashtriya Swayamsevak Sangha ( RSS), the ideological parent of the BJP, Paul was inducted into Deb’s cabinet last August along with Bhagaban Das and Sushanta Chowdhury.

“We are very attached to Biplab Deb ji. But we have to abide by our party’s decision. We as legislators will continue to do our jobs, and we will surely win in the 2023 assembly polls,” BJP’s chief whip Kalyani Roy said on Sunday.

BJP MP from Tripura and Union minister of state for social justice and empowerment Pratima Bhowmik didn’t comment on how Saha’s appointment could affect BJP’s chances in the 2023 assembly polls.

New chief minister Saha, known to be a close aide of Deb, joined the BJP in 2015. He was made chief of the party’s state unit in 2020. Saha became Tripura’s first Rajya Sabha MP from the BJP this year. During his initial days in the party, he was panna pramukh in charge of urban areas and also booth management committee in-charge in the 2018 assembly polls.

After resigning from his post, Deb said he will focus on strengthening the party’s organization to ensure BJP’s return in the 2023 assembly polls.

“ I hope our new chief minister will work as per guidelines of Prime Minister Narendra Modi. I will perform whatever responsibility the central leadership gives me, “ Deb said.

Earlier in 2020, BJP in Tripura witnessed differences after a large group of party workers raised slogans of “Biplab hatao, Tripura bachao” to replace Deb from his post when Vinod Sonkar, who was made the party’s state observer, arrived in Agartala for the first time.

Roy Barman was dropped from Deb’s cabinet in 2019 and he later switched over to the Congress with his close associate Ashish Saha in February, the party he had left in 2016 to join Trinamool Congress.

After coming to power, Deb invited controversies for his claims that the internet existed during the time of Mahabharata and that mechanical engineers should not opt for civil services.

There are also disagreements between the BJP and its alliance partner Indigenous People’s Front of Tripura (IPFT) over organizational matters.

“The people have suffered a lot in the four years of the BJP regime,” Trinamool Congress state president Subal Bhowmik said. “Although the BJP has replaced the chief minister, people will never welcome BJP anymore.”

Changing the face of leadership in the state might not have any impact on the BJP’s bid to retain power, political experts said. “The change of chief minister by BJP might not change the party’s fortunes in the next polls. It’s left to be seen who Saha will pick as his cabinet colleagues. One will know the shape differences within the party take after he decides on that,” said veteran political writer S Bhattacharya.

Some experts also expressed doubt over the lack of administrative experience of the new chief minister and feared a feud within a section of legislators that became visible with the announcement of Saha as leader of the legislative party.

“There are many other potential candidates in the party. The new chief minister is an educated person, but he has no experience on how to run an administration, “ said C Dey, a political analyst.