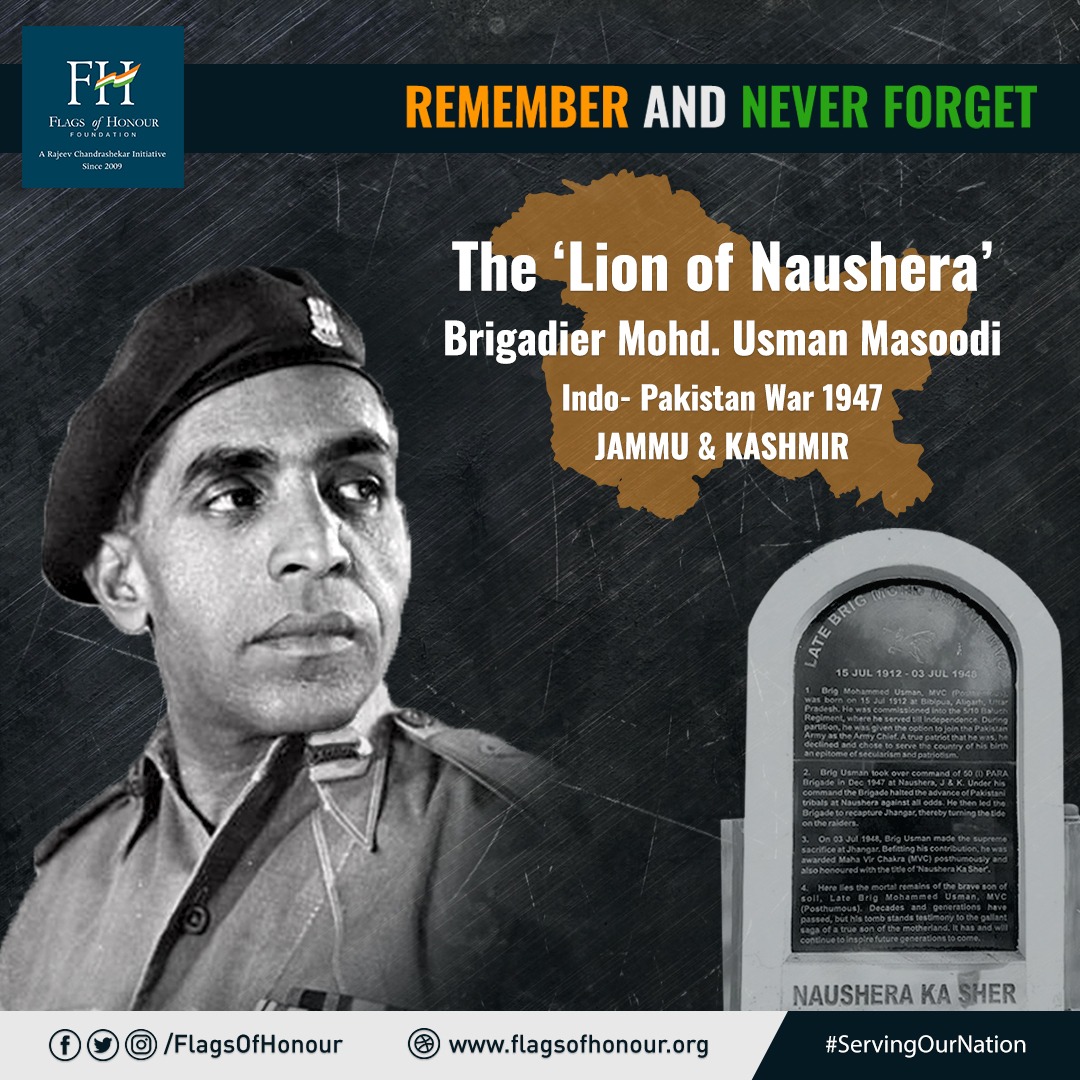 A Lion Who defied all the Myths: Brigadier Mohammad Usman

When a Legend is Born

Heaven must have cried when it had sent his favorite warrior to earth. It is said there are very few who could do wonders and are bestowed with a destiny to remain unforgotten. One of them was born on July 15, 1912, in Bibipur, Mau District of Uttar Pradesh. He was the son of Mohammad Farooq and Jamilun Bibi. He was named Mohammad Usman. He had two brothers and three sisters. One of his brothers was also serving in Army and rose to the rank of Brigadier.

Bravery is either earned or you are born with it, being the son of a police officer and brother of an Army Officer. At the age of 12, he had saved a child, he dared to jump into a well to save the child. His father wanted him to join Civil services however, his destiny was somewhere else. He chose a different path to become the Shera of Naushera by adorning the Olive Green Uniform.

When a Legend is turned to Be a Warrior

During the British era, it is difficult to get commissioned as officers as Britishers would prefer young chaps from the aristocracy or royal background. Despite belonging to a different class, Brigadier Usman sahaab applied for the Sandhurst. He got selected in July 1932 and sailed for England. He was the part of the last course to be held at Sandhurst where Indians were admitted. After this, all the batches joined Indian Military Academy which was situated in Dehradun. He and his ten coursemates passed out from Sandhurst on 01 February 1934.

It is always said that when you become the commanding officer of the regiment, it becomes your family. Every family does show its impact. This must be the reason that Brigadier Usman turned into a vegetarian while serving in Dogra Regiment in Burma. He was not married and remained a bachelor throughout his life. He was kindhearted and spent the majority of his salary on providing education to poor children. He had asked and asserted his men to keep a fast on Tuesday to distribute the food that could be delivered to the villagers in Burma.

He was a religious person however, his loyalty to his country always comes first. When 50,000 Raiders had taken refuge in Mosque near Naushera and our troops were hesitant in firing at the religious place. He was the first one to reach there. He ordered his troops to open fire while stating that this place was not a religious place as it was maligned by the raiders.

Naushera That Become the Battlefield of Shera: Indo-PAK War: 1948

However, We lost Jhangar in the battle on 25 December 1947. Seeing this and to boost the morale of the troops’ Brigadier Usman decided that he will sleep on the floor until he win back Jhangar. He used to sleep on the floor despite having chilling winter. He gathered his troops and boosted their spirits to defend Naushera. Due to his zeal to defend his country, he not only defended Naushera but also started giving major blows to the enemies at Kot. On 1 February 1948, we lost Kot, and an attack on Naushera was inevitable. He had 5 battalions working under him. Those were 3 Para Rajput, 3 Para MLI, 1 Rajput, 2/2 Punjab, and 1 Patiala.

Raiders attacked Naushera from two sides at 6:40 am on 6 February 1948. The total number of Raiders that were attacking was 11000, and Indian soldiers were outnumbered. However, nobody could beat the ones who are the messengers of death for enemies. Picket 2 of 1 Rajput held the post of Tain Dhar until the reinforcement could reach. There were 27 soldiers out of which 26 were killed in action and everyone showed a rare display of courage. One of them Naik Jadunath Singh was awarded the highest gallantry award called Paramvir Chakra Posthumously for his valor in leading the defense. Indian Soldiers who were defending killed 2000 raiders and lost 33 of their own and 102 wounded.

It was the decisive battle that earned the title of Naushera ka Sher (Lion of Naushera) for Brigadier Usman. He became a public hero for India who will be remembered for his commitment to his country for eternity. Pakistan frustrated by the win of India put a prize of Rs 50000 over the Head of Brigadier Usman which earned a win over the attitude of Pakistan.

When Major General Kalwant Singh credited the win to the leadership of Brigadier Usman. He as a true leader refused and wrote a letter to Major General to showcase his protest for giving him the credit only. HE stated that every man of his battalion jas fought equally and had their sweat involved in this victory.

Lieutenant General K. M. Cariappa (later General and Chief of Army Staff and years after retirement made Field Marshal), who had taken over as Western Army Commander, came to see the two operations which will be commenced in the last week of February 1948 to the second week of March 1948. The 19th Infantry Brigade advanced along the northern ridge, while the 50th Parachute Brigade cleared the hills dominating the Nowshera-Jhangar road in the south.

In March 1948, He launched the offensive attack on Jhangar to take it back from the clutches of raiders. He addressed the battalion of the 50 Parachute Brigade and said:

The time has come when our planning and preparation for the recapture of Jhangar have to be put to test. It is not an easy task but I am confident of success – because our plan is sound and our preparations have been good. More so, because I have complete confidence in you all to do your best to recapture the ground we lost on 24 December and to retrieve the honor of our arms.

The eyes of the world are on us. The hopes and aspirations of our countrymen are based upon our efforts. We must not falter – we must not fail them.

“To every man upon this Earth

And how can man die better

For the ashes of his fathers

And the temples of his Gods”

So forward friends, fearless we go to Jhangar. India expects everyone to do his duty.”

After a long battle, Jhangar was recaptured by the men of Brigadier Usman on the 19th of March 1948. After 3 months of sleeping on the floor, Brigadier Usman slept on a cot for the first time which was borrowed from the nearby village. He had ordered his men to keep a fast on Tuesdays so that civilians could get enough food in a war zone.

Also, the children of Naushera were trained by him to battle against the raiders and 3 of them won the gallantry awards for their bravery during the battle of Naushera.

Pakistan was not able to accept the defeat brought by his regular forces in May 1948 to capture the lost territory. Jhangar became the ground for battle once again and was subjected to heavy artillery bombardment. Many attacks were launched by the Pakistani Army. However, Brigadier Usman foiled all the plans to capture the Jhangar. This battle goes till July 3, 1948, when Brigadier Usman got killed in action by the 25-pounder shell. He being a braveheart and a soldier boosted his men to fight till the end. His last words were, “I am dying but let not the territory we were fighting for fall for the enemy”. If the pounder shell has not taken his life he would have turned 36 after 12 days of his death.

For his valor and zeal to protect his country he was awarded by “Mahavir Chakra” posthumously. Also, the state funeral was held where Indian Prime Minister Jawahar Lal Nehru and his Cabinet colleagues attended the funeral of Brigadier Usman as he is the highest-ranking commander to date to lay down his life on the battlefield.

Sleeping abode of Shera of Naushera

Brigadier Usman is buried in Okhla Cemetery near Jamia Millia Islamia Campus in New Delhi. After the reports of vandalizing our Hero’s sleeping abode surfaced. Indian Army upon knowing the state of his sleeping abode took charge to repair it and care for it.

Reference for this Blog-

“You have never lived until you have almost died, and for those who choose to fight, Life has a special flavor, the protected will never know

Thanks for sharing this story 🇮🇳🙏

Bravery is either earned or you are born with it,
👏👏
Again a wonderful article by my friend Ila on posthumously Mahavir Chakra awardee Brigadier Usman sir ✊🇮🇳

Nice to read this. You continue this noble work, I feel very happy to know these things.

Great content and Hats off to our Great Veterans.
Really good articles as always Ila.
Good luck to you