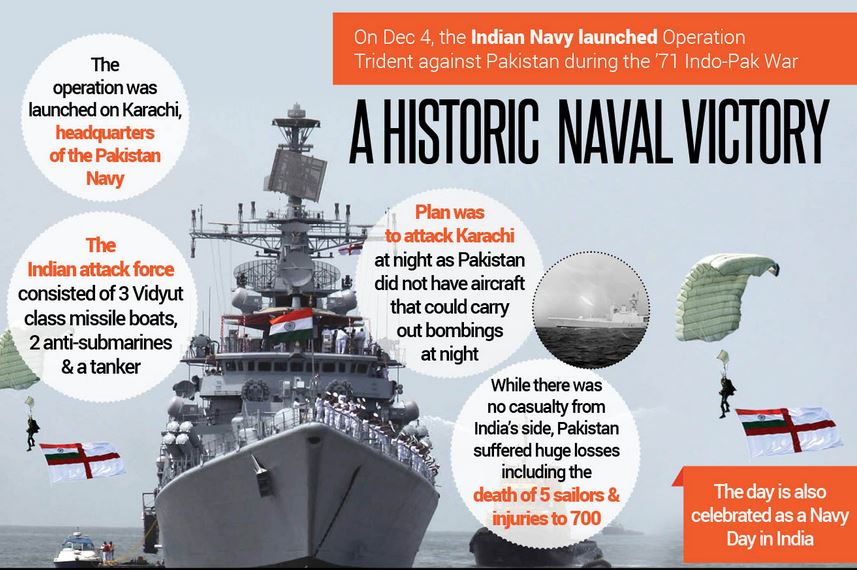 Navy day is a close reminder of the Indian Navy where we give the wings and reality to the words “शं नो वरुणः” which means ‘May the Lord of Water be auspicious unto us.‘ In 1971 on December 4, the Indian Navy decided to blow up the naval base of Karachi. It is the financial capital of Pakistan.

In 1965, the Indian Navy was asked to be in a defensive posture for a strategic reason. This leads to an attack on the pilgrimage of the Dwarka on the Gujarat Coast. Where Pakistan has managed to infiltrate with a light cruiser and six destroyers within the range of the town and shelled it. There was no military base and They managed to evade the detection leading to the discomfort of the Indian Navy.

When Admiral SM ‘Charles’ Nanda assumed his position as naval chief in 1970. He has decided to raise the Service’s profile with an aggressive foray. He was a meticulous planner and do things out of the box. He had men who were of the highest caliber and would prove their metal in the upcoming war.

It was decided that the navy would use recently acquired Soviet Osa/ Vidyut class missile boats. It was based on the doctrine of mobility over armor protection and firepower. The use of proper guided missile and countermeasure technologies. Warships could maneuver their enemies and conceal themselves while using powerful weapons.

There were new tactics were used to fulfill the goal of Operation trident by the Nanda and his boys to carry out the powerful striking ability to launch the attack. Each boat carried four SS-N-2 (P-15) Styx missiles with a range of 80 km guided by radar.

The group that will attack Karachi was formed which consist of the three Vidyut-class missile boats:

Petyas was to provide command, control, and communications. They will deliver warning signs if they encounter any aircraft of the enemy. Also, in an emergency, they can be used for refueling and a hand in towing a boat.

On December 4, Showdown began with the INS Nirghat which was commanded by Lieutenant Commander Inderjot Sharma. Around 10:45 PM (PKT), They moved forward to the northwest to fire its first Styx missile at PNS Khaiber. There was an explosion in the boiler room but the warship was sailing fine. Upon seeing this Sharma ordered to fire a second missile which hit the second boiler room of the PNS Khaiber. Due to this Khaiber drowned and Pakistan naval force was encountered with the loss of 222 sailors. INS Nirghat was the first warship to draw the first blood from the Pakistan Forces. It became the starting point of the cuts that Pakistan will have in their wounds.

The second wound was incurred by the INS Nipat commanded by Lieutenant Commander BN Kavina. It attacked the targets in the northwest area around 11 pm (PKT). The first target that was destroyed by the INS Nipat was Merchant Vessel Venus Challenger. It was carrying ammunition for the Pakistan Army and Air Force from Saigon. The loss of its cargo played a major role in Pakistan’s acceptance of the ceasefire on 17th December 1971. The second target that become the fodder of the INS Nipat was the C-class destroyer, PNS Shah Jahan. It was badly damaged leading to its eventual scrapping.

The third Loss was incurred on the attack on PNS Muhafiz, an Adjutant-class minesweeper now loomed over INS Veer. Lieutenant Commander OP Mehta commanded INS Veer’s radar. At 11:20 pm (PKT) fired a Styx missile struck it on left just behind the bridge. 33 sailors were lost as PNS Muhafiz sank in no time. It didn’t have time to send the distress signal.

INS Nipat went toward Karachi and fired two missiles. It destroyed Kemari oil which leads to the loss of oil reserves. It became the major factor behind the inability of Pakistan to carry out the war. Indian Air Force also helped in this by striking the oil tanks on the same day.

After the successful attack on the Karachi Naval base and destroying the oil reserves. They send the success code “Angaar” to Vice Admiral SN Kohli, Flag Officer Commanding-in-Chief, Western Naval Command in Bombay.

Before Pakistan retaliate through the air, the Indian Navy had moved their missile boats to safe havens.

The seal battle off Karachi was the most successful operation in naval history. Operation Trident Indian side didn’t incur any losses. To celebrate the success of Operation Trident we celebrate Indian Navy Day on December 4 where boldness and innovation lead to victory which created another history.

Tales of love, longing and letting go from the Punjabi heartland

Good research and great content. Thank you for this wonderful article

Pretty! This was a really wonderful post. Thank you for your provided information.

he blog was how do i say it… relevant, finally something that helped me. Thanks