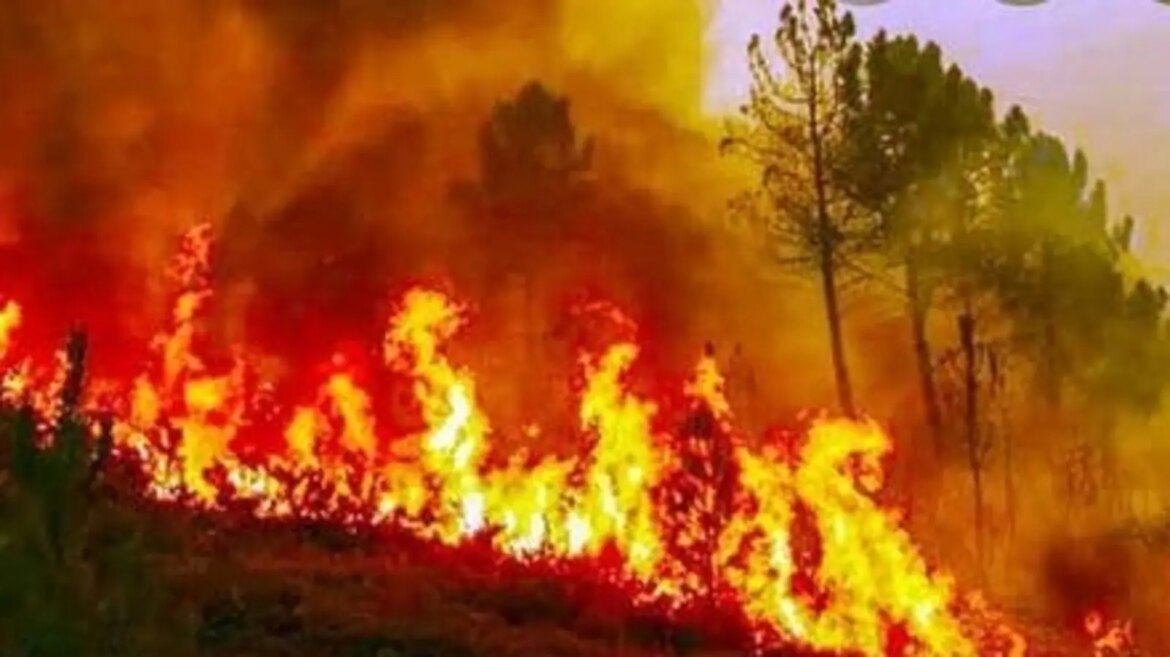 Fires detected through satellites are closely tracked in winter. They tell us about the extent of crop stubble being burnt, which is one of the causes of poor air quality in northern India in the season. However, satellites track the location of active fires throughout the year, not just winter. This year-round data analysed by HT shows that there are actually more fires in March and April than at any other time of the year. While these summer fires do not cause winter-like spikes in air pollution, they do have adverse environmental impact in at least one way: a majority of these summer fires take place in forests. How widespread are these summer fires? Where and why do they take place? How widespread are these fires in the current year? Here are four charts that answer these questions.

November fires are about half the fires in March or April

According to the VIIRS sensor aboard the Suomi NPP (SNPP) satellite, a public source of data on active fires across the globe, March (26%) and April (22.6%) together accounted for almost half of the fires that took place between 2013 (first year of full year data from VIIRS-SNPP) and 2021 in India. November, which has the third highest share, accounted for only about half the fires in either month, 12.3%. In some years, March fires have been about three times November fires. This was true in 2021, which saw the most November fires since 2012. To be sure, all fire counts in this analysis are particular to the satellite and the sensor. This is because the algorithm of these sensors only tells if any pixel (picture element) of the picture it has taken has at least one active fire. Therefore, the count of fires can vary across satellites and by pixel size, especially if one of them has a very large pixel size (which could result in several big fires getting counted as one). The VIIRS-SNPP fire data has one of the highest resolutions for active fire data, with each pixel covering a square of side 375 metres on earth.

Madhya Pradesh, Odisha, and Chhattisgarh are the Punjab, Haryana of March-April

What is the source of these summer fires? We know that a combination of factors related to agriculture – ranging from the cropping pattern to the large size of farms to a law that delays paddy harvesting – compels farmers, particularly in Punjab and Haryana, to burn crop stubble in winter. This fact, known from the ground, allows us to interpret winter fires as originating from farms. From 2012 to 2021, the average share of Punjab and Haryana in fires taking place in October and November was 59.3% and 8.9%. This cannot be true in the March-April period, as it is not a month when major paddy harvest takes place. This reflects in the share of Punjab and Haryana in the fires during the month: 0.4% each during 2012 to 2021. The biggest contributors to the biggest fire month of the year are in fact the states with relatively smaller farmers: Madhya Pradesh, Odisha, and Chhattisgarh. 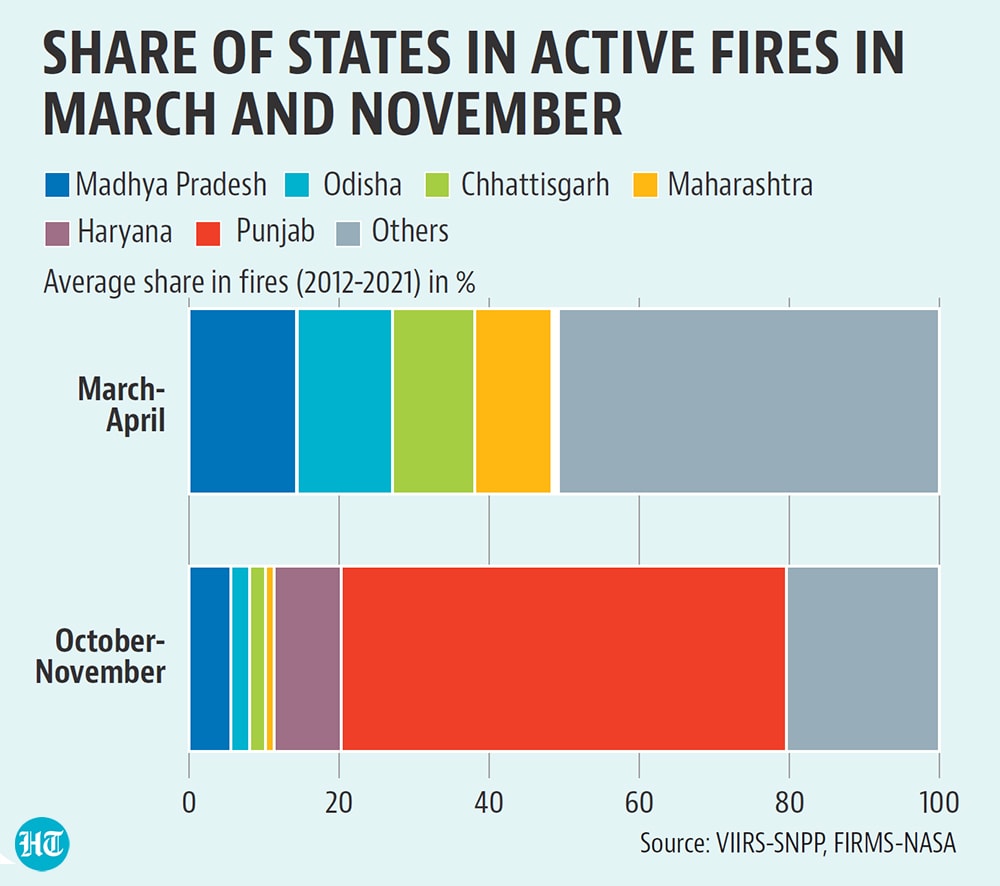 Although farm fires are not reported during summer, forest fires are. How much of total summer fires do they account for? The Forest Survey of India (FSI) uses the VIIRS-SNPP data in combination with its maps of forests to count forest fires. A comparison of FSI’s count with the overall number shows that on average 64.4% of March fires in the 2017-2022 period took place inside forests, although there are variations from year-to-year. For the full year, the average share of such forest fires is smaller: 36.4% from 2017 to 2021. Why do forest fires increase in March and April? Forest fires are highly unpredictable, said Sunil Chandra, deputy director at FSI, but added that there are factors that make this season vulnerable. Leaf shedding provides easy fuel, for example; and things could become worse if moisture is lost due to scant rainfall and high temperature. Winds can spread the fires fast and wide. For the 2012-2022 period, for example, the number of active fires in Chhattisgarh bears a moderate correlation with the average maximum temperature and rainfall. Generally, there were fewer fires in years with relatively low values of maximum temperature and high rainfall. As the chart above shows, 2022 is an odd year for forest fires. March this year was the hottest by maximum temperature and second driest March in Chhattisgarh since 2012, but the fires detected were only the fifth highest. At the national level, March 1-April 21 fires were the highest since 2012 in 2021, and are only the fifth highest this year. This is despite the fact that all the major fire states listed above (LIST) were warmer than last year in both March and April. Part of this reduction can be statistical. SNPP makes a pass over India roughly twice a day and fires active only for the period between those two passes will not be detected. But even if the count of fires has gone down this year simply because the fires did not last long, it suggests that such fires can be reduced. While an analysis of this season’s forest fires will be conducted after the season is over, Chandra said he suggested that the response time of the local community or guards in extinguishing the fires or a reduction in man-made forest fires can be possible causes of such reduction. HT reported some successful attempts of reducing forest fires in Maharashtra on March 30 last year (https://bit.ly/3O5ujTe). Replicating these measures across hot spots of forest fires can help in reducing them. This is why Mukesh Ambani’s $3.2 billion Future Retail deal collapsed