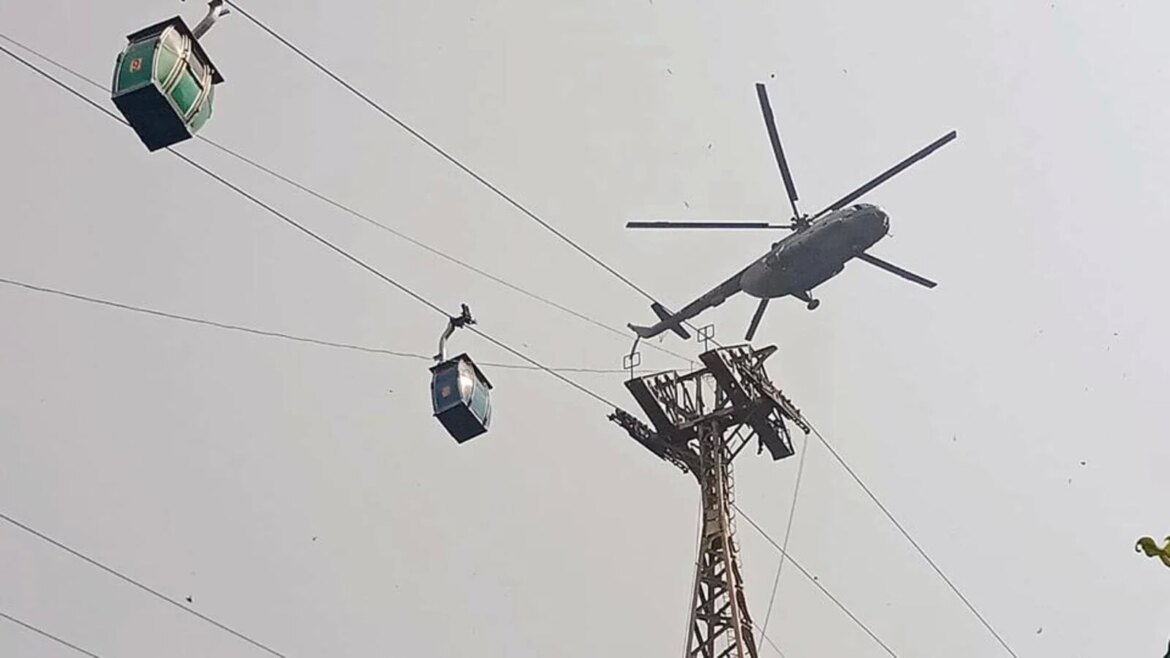 RANCHI: 32 persons were rescued from 12 cars after an accident at Tirkut Ropeway service in Deoghar district on Monday while the fate of another 15 who are still stranded mid-air hanged in balance as the joint rescue operation led by the Indian Air Force (IAF), Army, Indo-Tibetan Border Police (ITBP) and the district administration was stopped after dusk due to visibility issues, officials said.

At least two persons including a woman died in the ropeway mishap at the tourist location located around 20 kilometre from temple town Deoghar. While the woman succumbed to her injuries in the hospital after the accident at around 3pm on Sunday, another person reportedly died before dusk on Monday evening as he fell off the IAF helicopter when being airlifted.

“In total 32 persons were rescued today, one person slipped off the helicopter while being airlifted, while another 15 are still in the cabins. One woman had died of her injuries on Sunday night. The rescue operation was stopped after dusk due to visibility issues and it will begin tom morning,” said additional general of Jharkhand police, RK Mallick, who rushed to Deoghar from Ranchi to oversee the operations.

Earlier in the day, Deoghar deputy commissioner Manjunath Bhajantri said 48 persons were stranded in the 12 of the 25 ropeway cars which stopped mid-air after the rope on the down line dislocated from the pulley leading to the accident. While rescue operation was launched on Sunday evening, it could not proceed post dusk due to the topography.

Trikut Ropeway, according to the Jharkhand tourism department, is the highest vertical ropeway with a maximum lens angle of 44 degrees. The ropeway is around 766-metres long, while the Trikut hill is 392-metre high. There are 25 cabins in the ropeway, with each cabin having a capacity of carrying four passengers.

According to the victims rescued, the accident occurred between 3 to 3.30pm on Sunday. “We were stuck in the cabin around 3pm. We could not sleep all night. In the morning we got food packet and water. We lost all hope after we saw the helicopter returning after doing two sorties. But I thank those who rescued me,” unidentified rescued victim from Darbhanga in Bihar told reporters after bring grounded.

The day-long rescue operation started at around 6.30am on Monday and the first of the 48 stranded tourists could be rescued only after noon, around 20 hours after the accident. Besides motivating those stranded through loudspeakers, the NDRF teams managed to send food and water using drones and the maintenance rope.

Vivek Pandey, Spokesperson of ITBP, which was part of the operation, said the operation took time due to the height and the ropes making it difficult for the choppers to reach closer to the cabins.

“The first to be rescued were in the cabins that was only around 60 feet high from the ground. But risk increased as height of the cabins progressively increased to over 500 feet, thus increasing the risk factor. The ITBP has previously conducted a similar rescue at a ropeway in Mussourie. We could not have risked trying to run the ropeway again as it is risk prone to restart the system without a complete mechanical checking. So ultimately, the only option was to either provide anchors to the stranded and take them down or else airlift and land them at safe place,” said Pandey.

“We will conduct a detailed inquiry about the accident after the rescue operation is over. Currently the district and state administration are jointly focussing on rescue operation and medical aid to the injured,” Ansari said.

Jharkhand BJP president Deepak Prakash said, “The tourism department failed to do even the routine maintenance work in past two years. More so, tourism minister Hafizul Ansari failed to even reach the site on Sunday despite being in Deoghar on Sunday while our Deoghar MP Nishikant Dubey was stationed at the site all night and was coordinating with the Centre for help.”

Priyamani: People on social media have talked about my skin colour