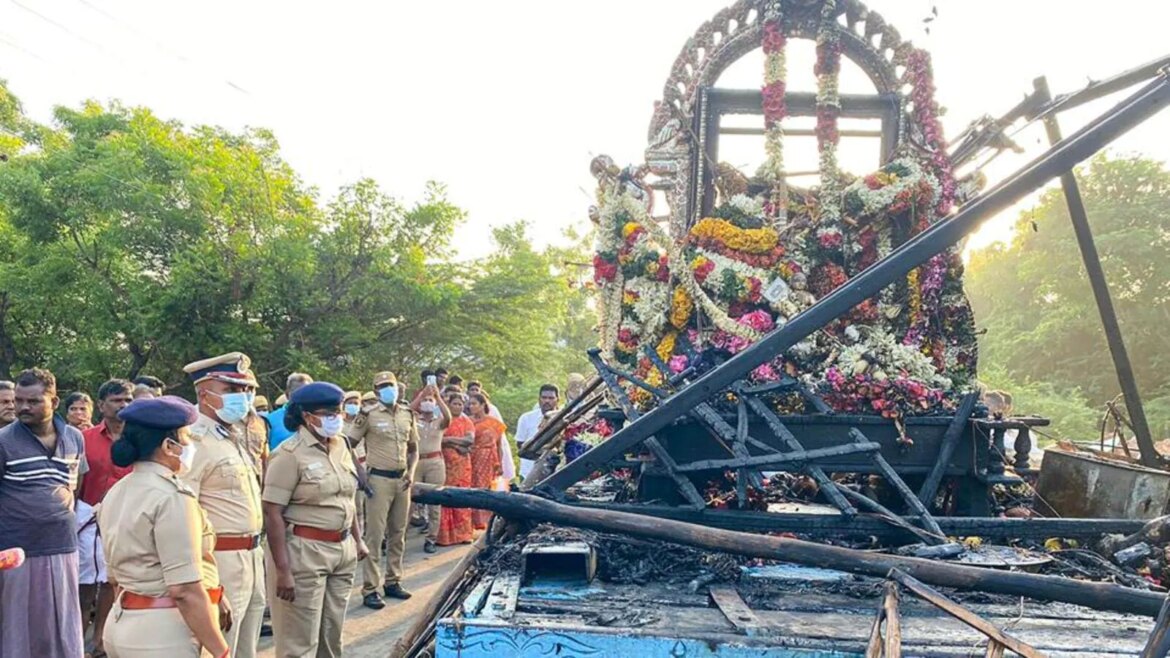 At least 11 people, including three children, were electrocuted after a temple chariot procession in Tamil Nadu’s Thanjavur district came in contact with a high-voltage power line early on Wednesday, police said.

As many as 15 people were injured in the accident which took place around 3 am near Kalimedu when the Appar Swamy temple chariot procession was underway. Police said the death toll is likely to increase as some of those who were injured and undergoing treatment at Thanjavur medical college hospital are believed to be in a critical condition.

Explaining the circumstances leading to the electrocution, police said the temple car was negotiating a turn when it came into contact with the overhead line. The people standing on the chariot were thrown in the impact, they said.

“The electricity board had switched off the low tension wire here. The high tension wire was by the corner of the road.Preliminary probe suggested that the chariot lost balance and slipped towards the high-tension wire,” Tiruchirappalli (central zone) inspector general of police V Balakrishnan said.

“While three persons died on spot, the remaining died during treatment at Thanjavur medical college hospital. A first information report (FIR) has been filed to investigate the exact cause and how the electrocution happened,” he added.

Eyewitnesses said “people were thrown away, they just fell down”. “I could see a man lying here and another one there and the unfolding scene was frightening as we could not understand what was happening,” a woman eyewitness said.

“Organisers could not go near the generator, leave alone turning it off. Obviously no one was sure from where the electricity was originating and how it was passing on and it was mayhem,” a villager who witnessed the procession move on said.

A third eyewitness said authorities of roads and electricity boards are to be blamed for the incident. “This should go to the chief minister’s notice so that such accidents do not occur elsewhere,” the witness said.

Chief minister M K Stalin, who met the injured in the hospital, announced the formation of a one-man commission of inquiry to thoroughly probe the accident and to put forth recommendations to make sure that such unfortunate incidents are not repeated.

“It is a tragic and painful incident. We have ordered government officials to take action on this issue. I have conveyed my condolences to the bereaved families,” Stalin told reporters.

“I have instructed officials to carry out rescue and medical work. We have to find the exact cause of the accident and will ensure that such accidents don’t occur in the future. For this purpose, I’ve appointed revenue secretary Kumar Jayant to understand the issue and make recommendations for necessary precautions to be taken,” he added.

The chief minister handed over a solatium of ₹5 lakh to each of the families who lost their kin in the mishap. The Dravida Munnetra Kazhagam (DMK) president also provided a ₹2 lakh solatium to kin of each of the deceased on behalf of his party.

At the hospital, Stalin handed over a solatium of ₹1 lakh to those critically injured and ₹50,000 to those who sustained mild injuries. He also gave the injured a solatium of ₹25,000 on behalf of his party.

Prime Minister Narendra Modi and President Ram Nath Kovind also expressed their anguish over the incident. Modi announced a compensation of ₹2 lakh each to the families of the deceased and ₹50,000 each for the injured.

The electrocution of the 11 people echoed in the state assembly.

Leader of the opposition AIADMK K Palaniswami sought enhanced compensation to the victims’ families. Taking exception to the government for not preventing the incident, Palaniswami led his party members in staging a walk out.

Later, the opposition party members returned and insisted upon the speaker M Appavu to allow them to debate on the accident. But the speaker initially declined saying they cannot debate as they had staged a walk out on the issue. However, he would provide them an opportunity later, he said.